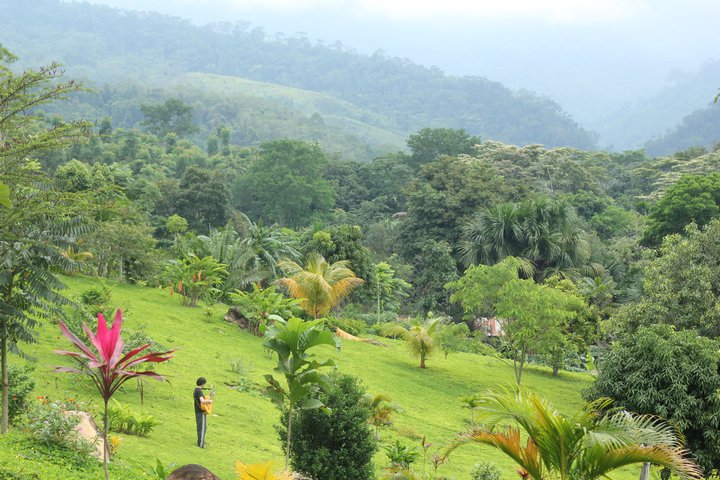 David Ellenbogen is a musician, producer, educator and a New York City radio host. As a guitarist and vocalist he has performed in The Kingdom of Tonga, Ghana, Australia, Thailand, India, and at home in New York. With an open mind and approach, he performs everything from Hendrix to Bach and incorporates world music styles that span continents and centuries.

After earning a Masters degree in education from Columbia University, David began producing concerts and lectures for the Columbia’s Center for Jazz Studies. The success of these events caught the eye of legendary producer George Wein, whose achievements include creating the Newport Jazz and Folk and Festivals (in 1954) and The New Orleans Jazz and Heritage Festival. David was soon hired by Wein and he helped produce dozens of festivals internationally, eventually becoming the Associate Producer of several JVC jazz festivals.

After a few incredible years with Wein, David left to record, study and play music in places like Samoa, Bali, and most significantly, India. In Calcutta, David studied raga intensely with Debashish Bhattacharya, who has been called, “the world’s greatest slide guitarist.” Bhattacharya now refers to David as his “first Western disciple…after which hundreds have now followed.”

For over a decade, David has been sharing his love of music by producing and hosting radio shows. He has been on the air at several stations, including a four month stint as a DJ in Ghana, West Africa – with a listening audience of millions. In the past few years, his programs on WKCR 89.9 FM-NY have gathered their own momentum. He created a show, “Ragas Live,” where the greatest names in Indian Classical Music have come to perform live in the studio. Once that show was underway, David expanded his reach to present musicians from all around the world. Scores of Grammy winners have come to speak or play and his guests have ranged from Walter Becker, founder of Steely Dan, to McCoy Tyner, pianist in John Coltrane’s classic quartet. On June 21st of 2012, WKCR will host a 24 hour “Ragas Live” festival, featuring 24 artists performing 24 different ragas all live in the studio!

As David began to build relationships with musicians who had come from every corner of the world, he began to realize that you do not necessarily need a plane ticket to study African, Indian or South American music. Many of the best musicians now live in New York. Because he knew so many great world musicans, and years of independent teaching had led him to have contact with many great students, David decided to bring both energies together by creating a company World Music Education, which provides group lessons with master musicians from all around the globe.

Today David is busy teaching, performing, DJ-ing live events, and producing his radio shows on WKCR 89.9 FM-NY. He is currently recording and performing with Acoustic Mandala Project which he founded with bansuri wizard Joshua Geisler,  Famoro Dioubate, and Karavan Kosmiko amongst other projects. His latest musical pilgrimage was to Timbuktu, Mali, where he recorded with local guitar virtuoso Oumar Konate.  He hopes to continue serving the music and is proud that many of his guitar students are now actively performing.